The Institute of Danube Swabian History and Regional Studies  (IdGL) was founded in 1987 as a non-university research institution that reports directly to the Ministry of the Interior of the Federal State of Baden-Württemberg. Thanks to its clear remit, innovative thematic approach and interdisciplinary focus, IdGL is a research institution of both national and international renown.
In terms of content, the role of IdGL is to “investigate and document the history, regional customs and dialects of the German settlements in South East Europe as well as the historical issues of the flight, displacement and integration of German expellees.” A further task is to “support relevant courses at the universities in the Federal State of Baden-Württemberg, issue publications and organise scientific conferences”.

The Institute of Danube Swabian History and Regional Studies puts its founding mission into practice in three main areas: Research and teaching, documentation and public relations. In this context, migrations, minorities and memories are the keywords in terms of content that also reflect the Institute’s main areas of expertise.

IdGL has an interdisciplinary focus and combines historical, geographical, political, literary, linguistic and cultural studies perspectives in its activities. In both basic and project-specific research, the Institute pursues a two-fold transfer history approach: On the one hand, the interrelationships that followed the historical emigration in the multicultural settlement area in South East Europe are explored; on the other hand, exchange processes are studied that evolved following flight, displacement and relocation between Baden-Württemberg (or Germany) and the former settlement territories and have since further developed on a considerable scale in present times: “Danube Region Strategy” is the keyword in this context.

The research field addressed by IdGL is clearly defined. It covers the northern part of South East Europe, i.e. in the first instance today’s Hungary, Romania, Croatia and Serbia. IdGL cultivates close international partnerships with research institutions in these countries, which link research and teaching and are anchored in long-term agreements. In addition, its own scholarship programme nurtures contacts to young researchers in these countries. 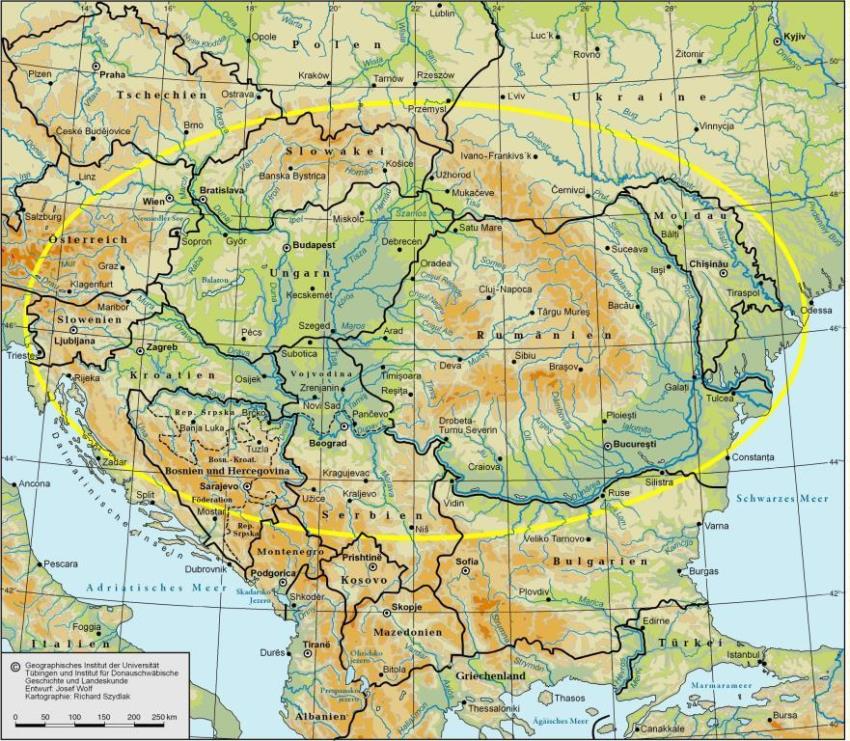 As a non-university research institute, documentation and maintenance of the scientific infrastructure at IdGL is a core task. This is seen both in the specialist library with its important South East Europe collections as well as the Institute’s archive, which is constantly augmented through donations and purchases and made (digitally) accessible to the public, and its picture collection (photographs, graphics).

IdGL is also eager to foster knowledge transfer through its annual conferences together with its publications, exhibitions and lectures and in this way reach the general public. In Tübingen, the platform for this is the Institute’s particularly close working relationship with the University of Tübingen within the framework of a partnership agreement.