Within the framework of its research work on the northern part of South East Europe, the Institute concentrates on what are known as the Danube Swabian settlement areas in the middle part of the Danube basin. These evolved in the course of the Hapsburg settlements and interior colonisation in the territories of the Lands of the Crown of Saint Stephen from the end of the 17th to the second half of the 19th century.

“Danube Swabian” is less a historical and cultural term than a scientific construct. The word is based on a term introduced by German research after the collapse of the Austro-Hungarian monarchy in 1918/20 and the new political identity of the descendants of modern-day settlers. After 1945, an epochal year which saw forced migration on a mass scale for the German minorities too, the term gradually established itself - with political support - in the German-speaking area and its meaning was geographically broad but somewhat vague as far as politics and administration were concerned. As a collective term, it today encompasses all German minorities that formed along the middle reaches of the Danube as a result of modern-day migration to South East Europe.

The Danube Swabian settlement areas are found in today’s Croatia, Hungary, Serbia and Romania and encompass: 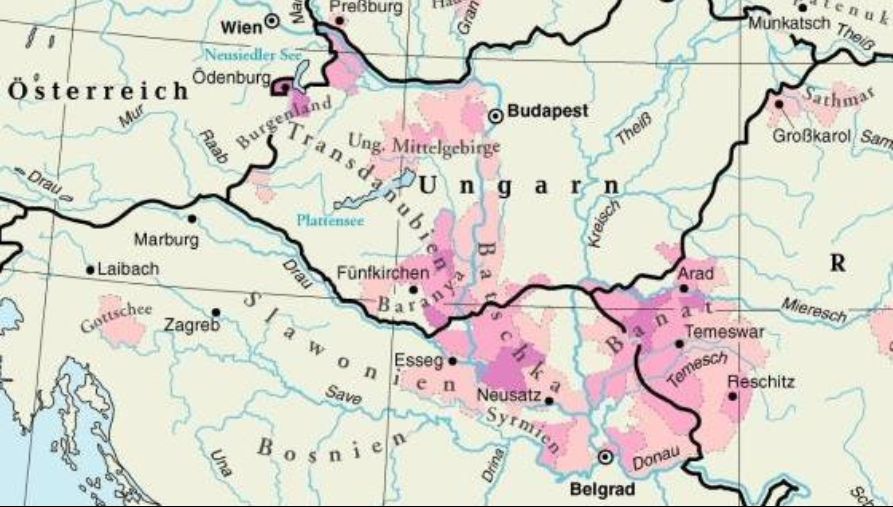 The modern-day cultural stock of these regions characterised to a high degree by ethnic and denominational diversity – types of economic organisations, social structures, ways of life and beliefs – is mostly based on cross-group, macrosocial acculturation. These are closely linked to migration and settlement events that were accompanied by contact and transfer processes in the course of expanding Hapsburg power and left their mark on the region’s appearance.

The Danube Swabian settlement areas, which belonged to the Hungarian part of the imperial and royal monarchy up until the end of World War I, were for the most part allocated to three states – Hungary, Romania and the Kingdom of the Serbs, Croats and Slovenes - as a result of the new demarcations. The development of the regional Danube Swabian groups continued from then on within the framework of the respective minority policy of the three nation states. During World War II, the German minorities in the three states were instrumentalised by Nazi Germany for its invasion, occupation and annihilation politics and also instrumentalised themselves. The outcome: At the end of World War II, they were held liable for Nazi politics and subjected to various measures – expropriation, deprivation of rights, deportation - in the three states.

National Socialism and the consequences

Hungary deported half of its German minority – a move moreover sanctioned by the Allies. Yugoslavia got rid of its German minority without having an international mandate and only from Romania was they no mass expulsion. As a result, the centre of all Danube Swabian settlement shifted abroad and increasingly westwards and mostly to the south-western part of the Federal Republic of Germany.

Integration in the new old country

It was for this reason that in 1954 Baden-Württemberg assumed responsibility   for the “Sponsorship Scheme for the Danube Swabian Ethnic Community”. One of the outcomes of their integration in Germany was that members of the Danube Swabian groups became bridge builders to their countries of origin during the Cold War, a function which bore fruit following the fall of the Iron Curtain in 1989/90 and up until the adoption of the EU’s Danube Region Strategy.

As an outstanding example of a history determined by migration and minority existence, the Danube Swabians are today firmly established in the culture of remembrance of their countries of origin and are at the same time a complex research topic which enables a better understanding of the recent and contemporary history of multi-ethnic South East Europe and its relations with Germany.